The development of Sole AIO began in 2017 by a team from Scotland, United Kingdom and has made significant headway in the botting scene. The bot started off as an Adidas exclusive bot but over time, the team was able to add additional sites making it an all-in-one bot. Sole AIO’s retail is marked at 240£ with a renewal fee of 50£ every six months. The bot restocks happen about once a month through their website and they're announced via the Sole AIO Twitter. Similarly to most bots of Sole’s caliber, these restocks require you to be fast in order to purchase.

Sole AIO was well known for its massive success on the Adidas platform Demandware, but it’s the ability to destroy Shopify was proven in March of 2019 when a fair amount of Yeezy 350 Blacks on Shopify sites were secured by Sole AIO users.

Not only does Sole AIO support Adidas and Shopify; it supports a multitude of different sites including:

In addition to the standard features of an all-in-one bot, Sole provides many distinct features that help it gain an edge when limited drops occur.

Adidas Account Generator
The bot’s close relation with Adidas drops is the reason it has a built-in Adidas account generator. Users are able to generate Adidas accounts seamlessly and within a few clicks giving users a major advantage on these drops.

Proxy Groups
The addition of proxy groups in Sole AIO lets users organize and use different types of proxies when running multiple site types (Shopify, Supreme, etc.) at once. Users can add their proxies to a group, and when creating a task, select the group they wish to use. The bot will automatically allocate proxies from the group selected to be used for that specific task. 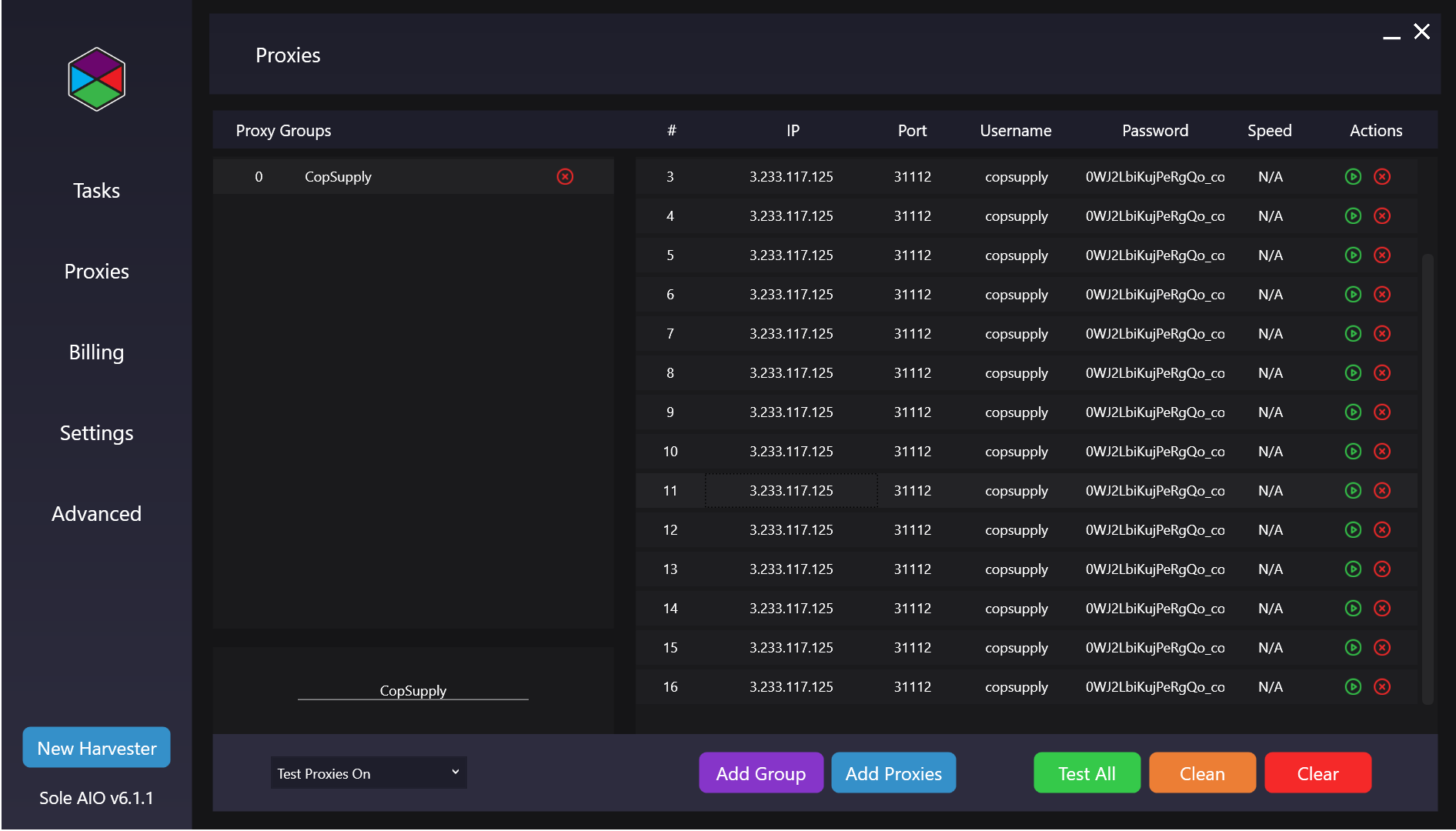 Account Storage
For the benefit of users, Sole AIO supports account storage for sites that require account logins such as Concepts Inc. and Undefeated. Users can simply navigate to the “Advanced” tab and enter their account information in an email:password format. You are also able to import accounts from a file, making it easier to enter multiple accounts at once in a swift manner. 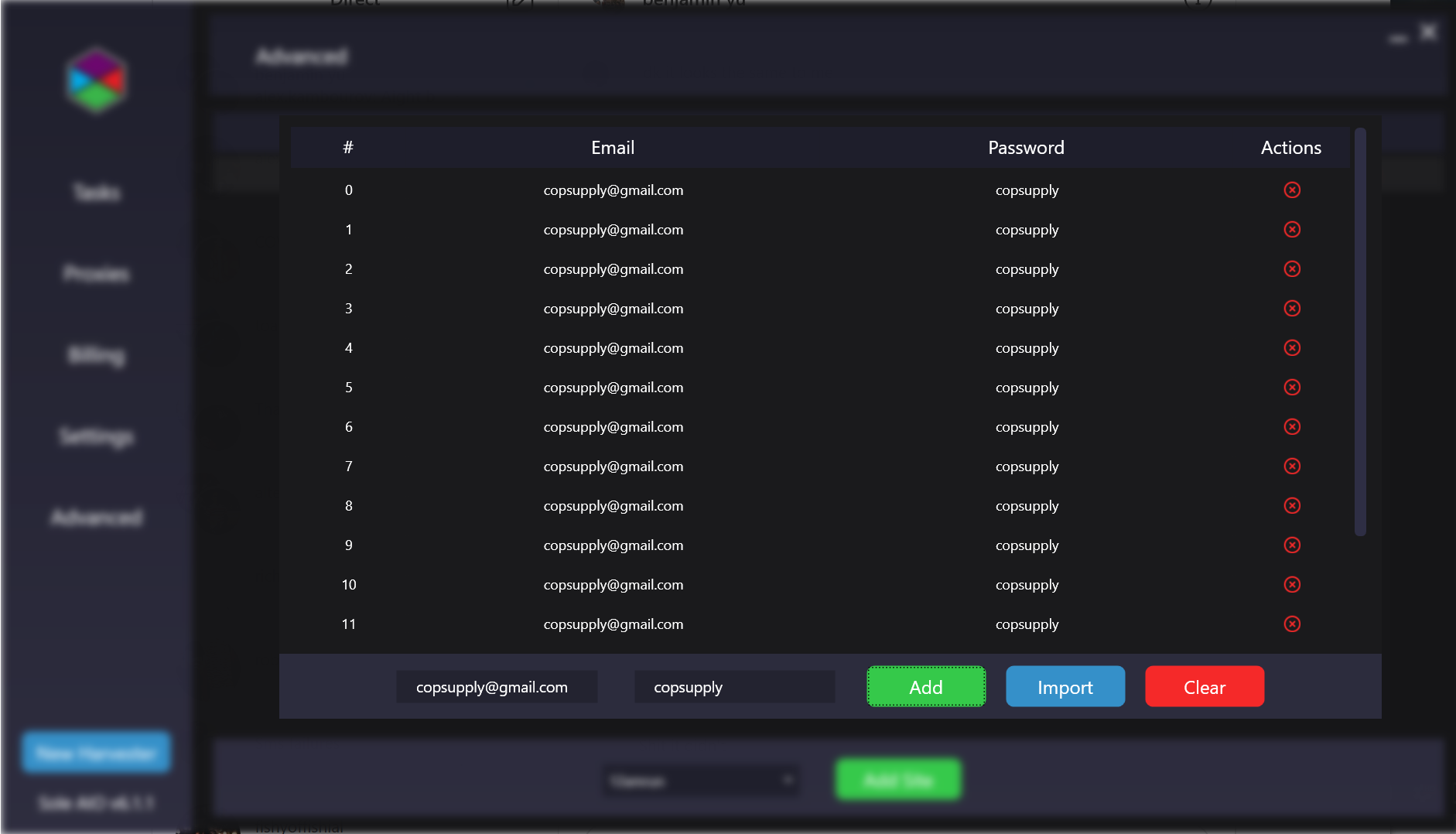 Pre-Loaded Shipping Rates
With Shopify constantly making changes to their checkout procedure, every second counts. In order to significantly decrease checkout times on Shopify, users can pre-load shipping rates per-site in the “Advanced” tab of Sole AIO. Instead of the bot collecting shipping rates during checkout, it will input shipping rates that have already been saved for a specific site skipping one step of the checkout process. 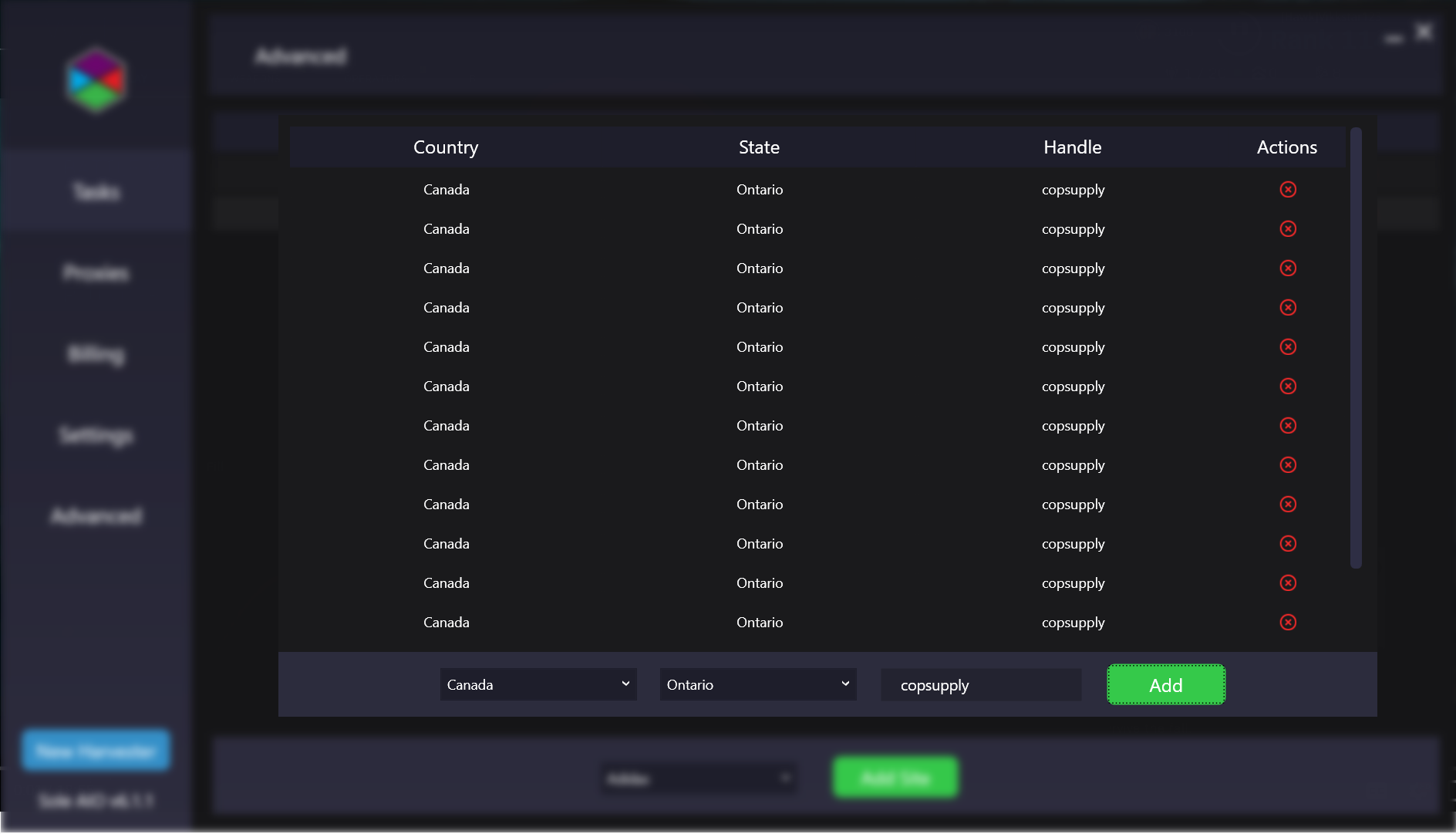 In-House Captcha Harvester
With the V5 update, Sole AIO introduced its own in-bot captcha harvester making it easy for users to accumulate one-click captchas on their accounts. The harvester simulates human-like activity on the account by watching Youtube videos and performing searches, providing an alternative to purchasing One-Click botting software or trusted mail accounts. 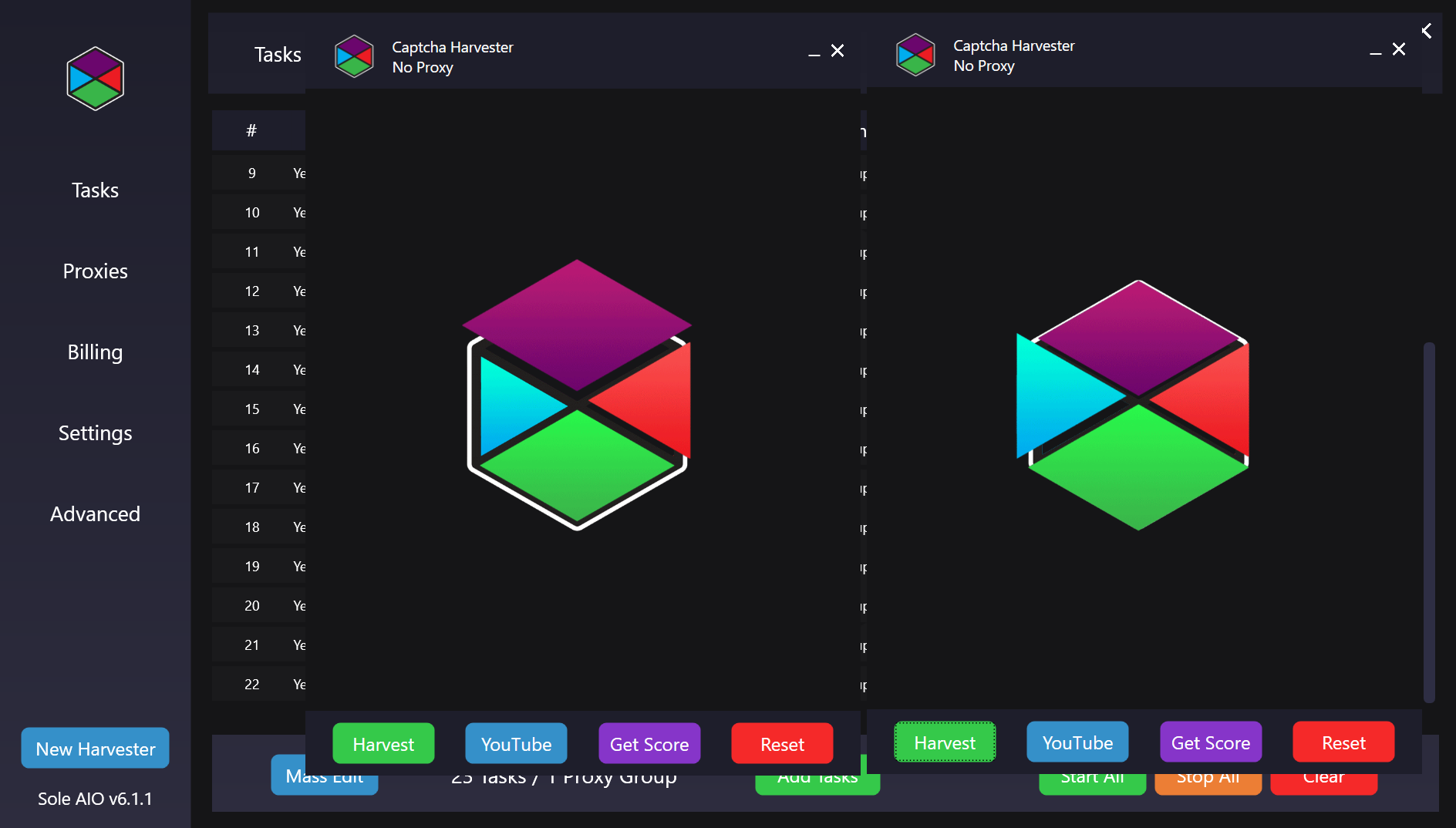 Mass Edit Tasks
Sole also provides a nifty solution for editing multiple tasks at once. Users are able to edit multiple tasks according to the website or task ID. Editing keywords, delays, and links during drop time has never been easier. 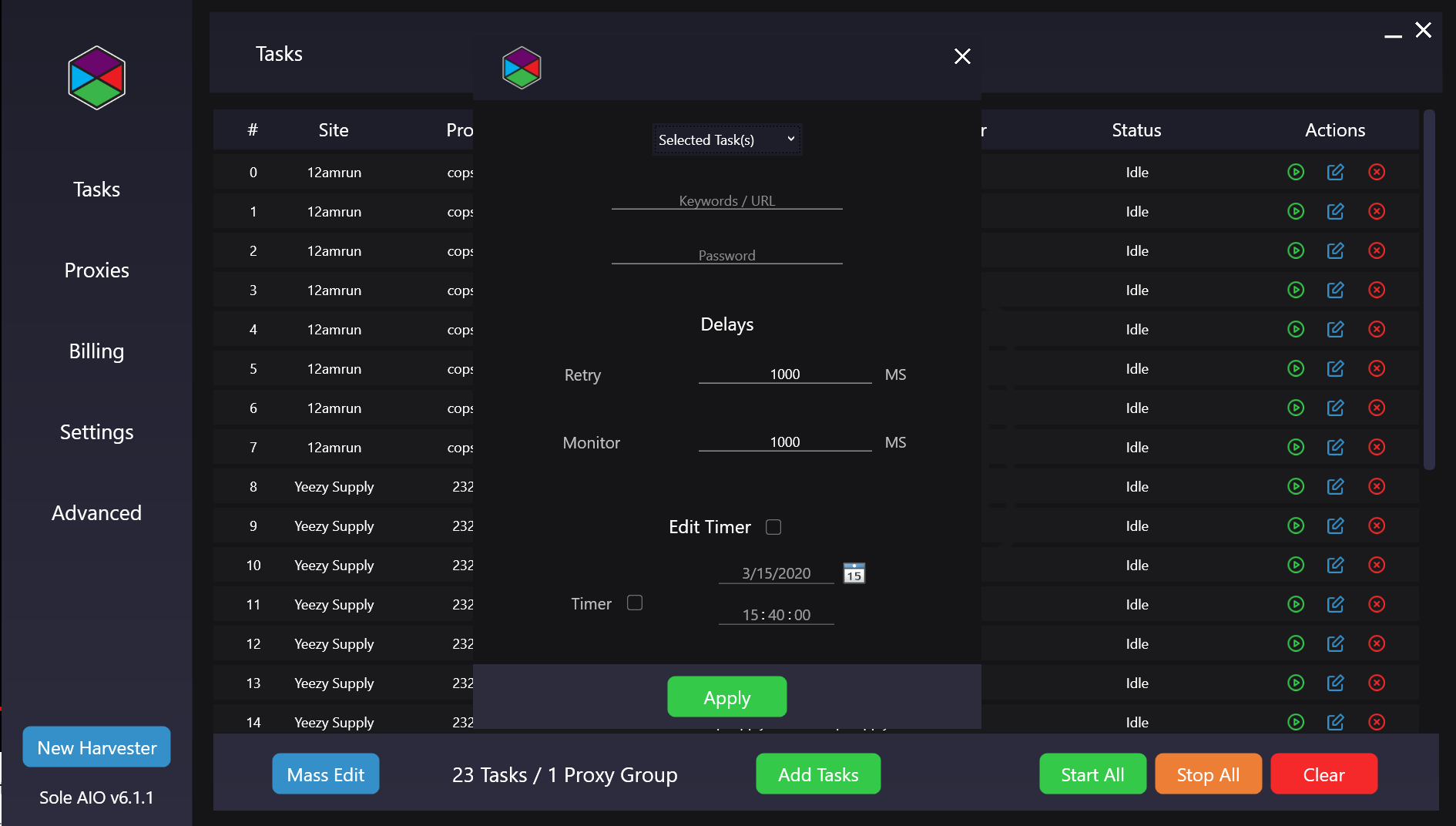 Similar to many other bots the Sole AIO team has many ways of providing support to its members. Release guides, general use guides, and successful bot setups are provided and are available at the fingertips of Sole AIO users in their designated Discord server. Additional guides are available on the bot’s youtube channel

If you still can’t find what you are looking for, one-on-one support is available through private ticket creation in the Sole Discord server. Simply create a ticket and one of the team’s staff members will assist you shortly.

Where does Sole AIO rank among other AIO bots?

Sole AIO’s dominance on YeezySupply, Adidas, and Shopify has become an underlying statement that the bot is truly a top competitor when it’s at its best. Although the bot has consistently done well on Adidas and YeezySupply, it tends to face hardships on Supreme, Shopify and other sites every so often. The bot has its ups and downs just like every other botting software, and the developer team is able to adjust and come back stronger for future drops. This was shown recently when Sole AIO had seen a slump on Shopify site success, but then was able to checkout an astounding number of pairs on a recent Stussy drop; outperforming other AIO bots such as Balkobot, Cyber, etc by a far margin, after a full Shopify recode by the developers.

Sole AIO continues to be one of the best price-for-value bots available and is perfect for the beginner botter, as it has an easy to learn interface, supports many sites, and has adequate success on every drop. For the more experienced botting user, Sole works better as a complimentary bot paired with another bot that supports a different range of sites such as Footsites, Mesh, etc. 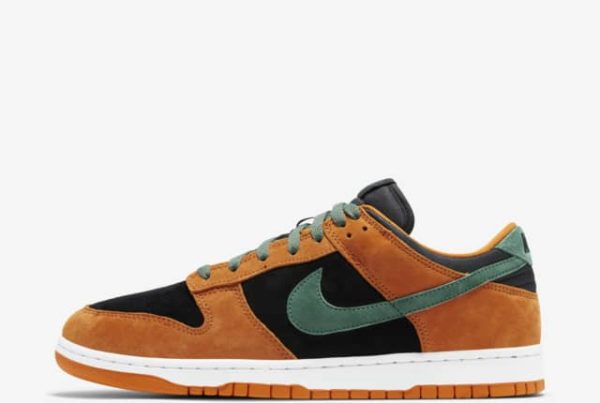 Like almost all previous dunks this dunk has tons of hype and demand. This is one of the more unique dunk colorways we’ve seen in awhile. Stock is expected to…
CopSupply
Love0 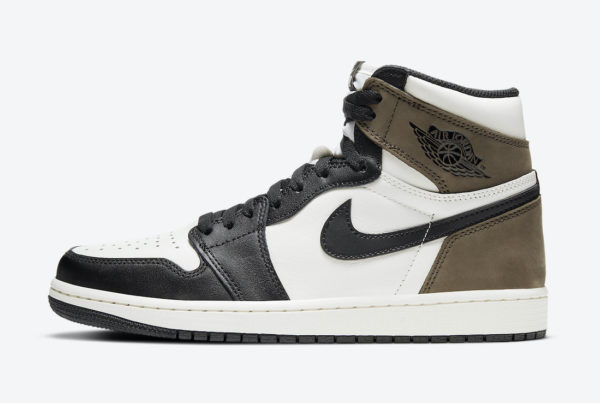 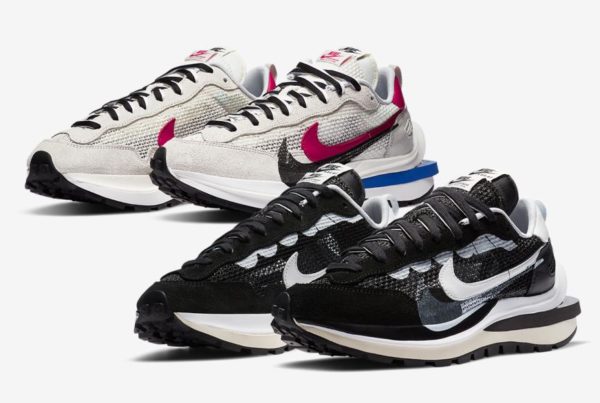 Following the release in the EU, this shoe's resell has not taken a huge hit as this shoe has a lot of hype and demand due to the unique colorway,…
CopSupply
Love0 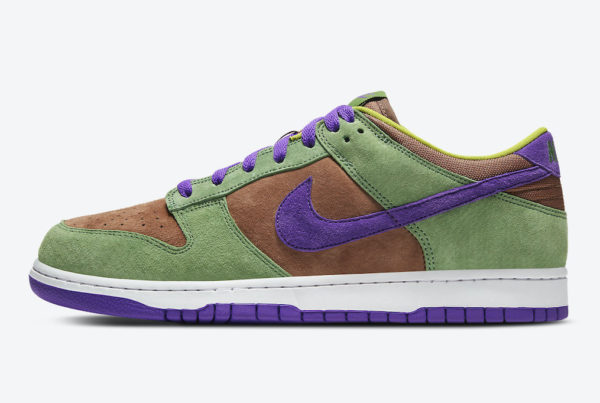 There is a lot of hype and demand for dunks. All previous dunks that had released have been really profitable and had increased in value over time. With the low…
CopSupply
Love0

These will be releasing in the US in tomorrow (10/31) and a EU/Asia release will take place next month. There is tons of hype and demand for this Jordan 1…
CopSupply
Love0 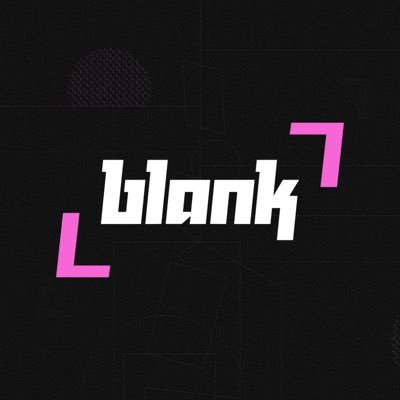 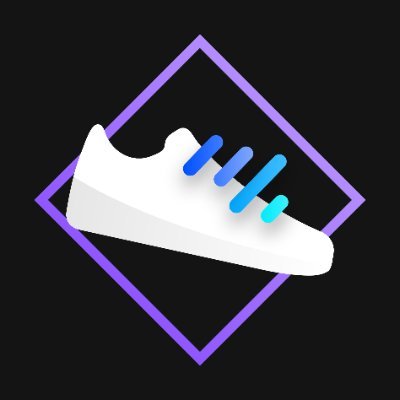 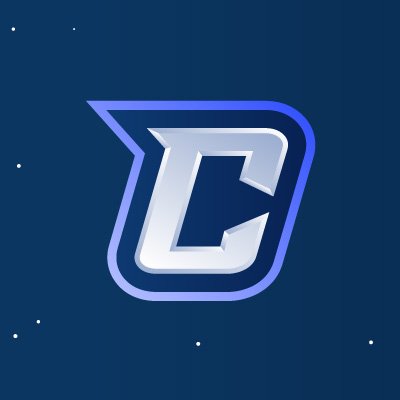